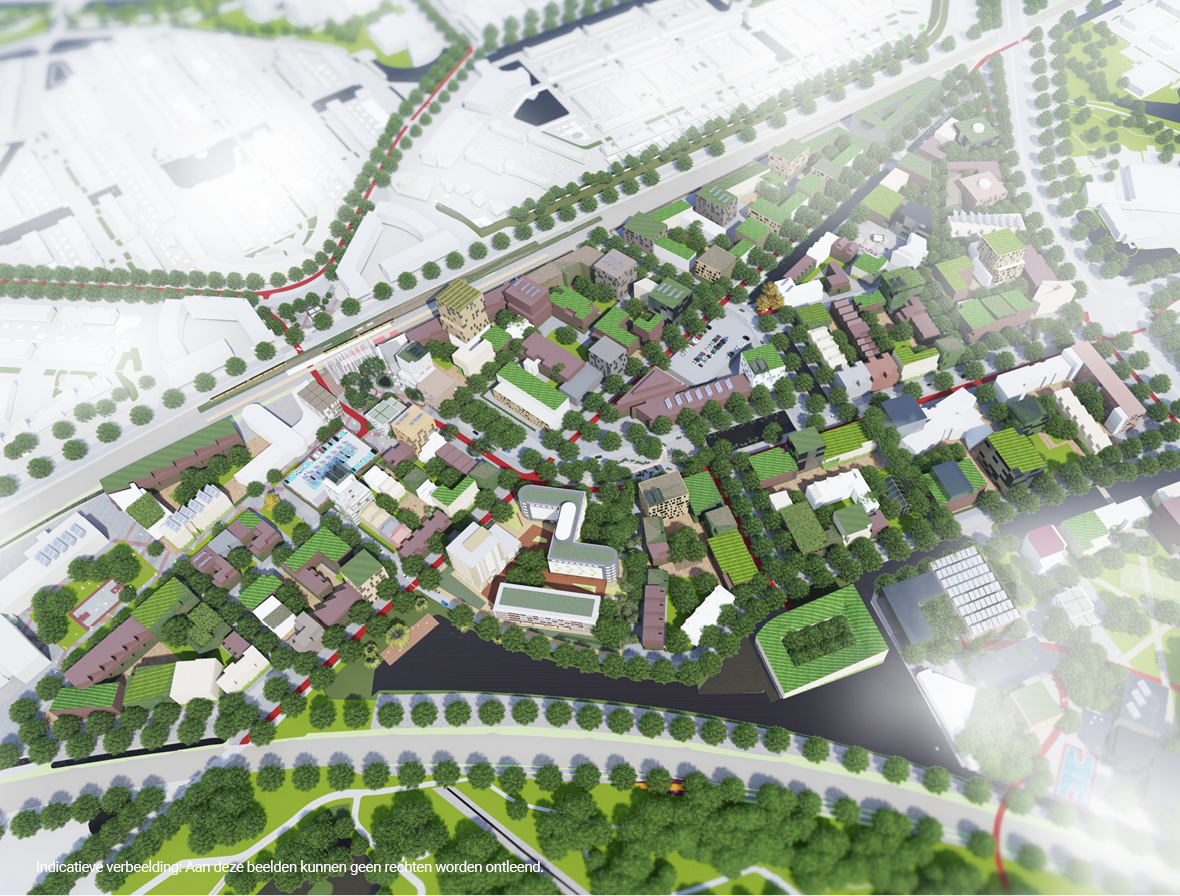 Hoef West is currently a monofunctional office zone with various educational institutions. After an intensive process with owners, developers, companies, residents and the municipality, Karres and Brands has developed a plan to gradually transform the area into a multifaceted, inclusive city district. The realization of 2,500 new housing units and the expansion of several educational institutions, combined with the preservation of 5,000 jobs, all make Hoef West one of the largest regional area development projects in the Netherlands.

Central to Karres and Brands’ urban plan is the redefinition of public space. The exchange of private and public space allows for the creation of a more compact area and the development of a strong urban framework with new streetwalls, compact squares, parks and canals. The public space, which is currently functional, hard and primarily intended for cars, will be transformed into a modern, climate adaptive public space designed with pedestrians and cyclists in mind. A new canal structure across the area will connect various green and water structures. At the heart of the district will be the new Hoef Park. The introduction of small streets will make the area closely knit and permeable.

Mobility hubs, alternative mobility concepts, pedestrians and cyclists play a central role in the plan for Hoef West. New bicycle and pedestrian connections with the surrounding area will be created, and bicycle paths will be adapted for e-bikes. Cars and bikes will be parked in mobility hubs and shared transportation can be rented. The mobility hubs will also serve as energy storage points. At ground level, there is space for local facilities such as a pick-up point, a dry-cleaning service or a gym. By moving the bicycles parked in the square in front of the station to the closest mobility hub, the refurbished square can become Hoef West’s trademark.

The fundamental principles for construction are the composite city block made up of distinct structures and variation in housing typologies, workspaces and attractive interior courtyards. In collaboration with Urhahn, the plan is translated into a development framework with concrete urbanistic preconditions and guidelines for the development of individual plots. These preconditions relate to construction, compactness, functional variety and sustainability and are designed to serve as a guiding light for developers. In short, the preconditions are designed to contribute to smart, sustainable development. And not only is the plan focused on energy, it also aims to promote inclusiveness, circularity, mobility, health, greenification, biodiversity and climate adaptation. Developers will be explicitly asked to think outside of the parameters of their own property. This will make the development complex, while at the same time bringing a distinct added value to the area as a whole.

In September 2019, the plan was approved by the municipal council of Amersfoort. In cooperation with various stakeholders and the municipality, it will be implemented in the coming years. Karres and Brands will design the public space and continue to serve as supervisor for future development. Construction is expected to begin in 2020.

De Hoef West in the news: